The term ‘authenticity’ is multifaceted, from its common definition right through to its complex Existentialist meaning.

What is clear, through this plurality of sense, is that authenticity in any of its critical forms implies an affirmative individuality or genuineness. It can be argued, however,
that this state can only actually be achieved through an Existentialist definition of the term, whereby the authentic is not true or real by an external, generic reasoning, but stemming from the individual’s sense of value choice.

In initiating this dialogue between two discrete movements through a discussion of terms, I hope to have highlighted not only philosophical commonality between Dada and Existentialism, but also their combined intersection with contemporary art and theory.This cross-over is particularly evident in the continued influence of Dada art, as well as in the presentation of retrospectives of solo Dada artists, combinations of Dada artists, the co-presence of Dada and ‘non-Dada’ artists, and the conscious referencing of Dada as an artistic influence in contemporary works. A prominent example of this continued presence is illustrated by Duchamp, who continues to have retrospectives dedicated both to him as a solo artist and alongside others, as we have already seen in the Barbican’s 2013 retrospective, Dancing around the Bride, linking his art and thought to Cage, Rauschenberg, Cunningham and Johns.
A relevant satellite to this exhibition was Geoffrey Farmer’s The Surgeon and the Photographer (2009-13), a set of 365 puppets constructed with fabric torsos and paper faces, limbs and accessories cut from books and magazines. While the work was not part of the main exhibition space, it claims as its inspiration ‘the collage and assemblage traditions of Hannah Hoch and Robert Rauschenberg, the element of chance employed by John Cage and Merce Cunningham, and an animist perspective from Pacific Northwest Coast cultures’ (Barbican Online, n.pag.). 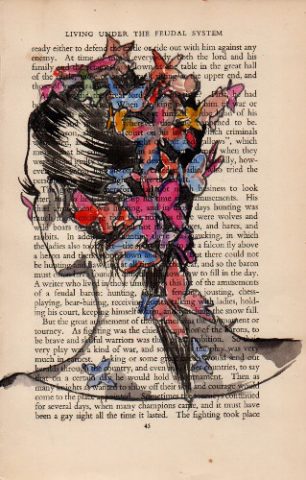 On meandering through this slightly ominous crowd I was also struck by the affinity it held not only with my own findings on masks in Dada, but particularly with the work of Taeuber, despite her not being cited as an influence. Like Taeuber’s costumes, the 365 puppets embody an individuality that invites a constant sense of choice, an emphasis on becoming. It can be no accident that these puppets number 365: the artist implies quirkily that one can rake on a new puppet, that is, a new combination of characteristics, for each day of the year, should one choose. And though a century separates Taeuber’s and Farmer’s works, the likeness is undeniable.
Both Dada and Existentialism are often reductively deemed products of their time, results of their wartime context and, as such, irrelevant to contemporary society. Evidently Dada’s continued artistic influence refutes this, as demonstrable through its sustained strong presence in the art world. In a less visible (or visual) manner, Existentialism also continues to make itself heard, perhaps, as Richter explained, because we all live in an ‘existential vacuum’, no doubt exacerbated by the omnipresence and rapid disposability of social media in the contemporary age of information. On reviewing the literature of Existentialism, a recent renewed enthusiasm was demonstrated for this complex movement that has led to a plethora of new texts on the subject, proving its constant relevance both within and outside of academia.

We use cookies on our website to give you the most relevant experience by remembering your preferences and repeat visits. By clicking “Accept”, you consent to the use of ALL the cookies.
Cookie settingsACCEPT Read More
Manage consent

This website uses cookies to improve your experience while you navigate through the website. Out of these, the cookies that are categorized as necessary are stored on your browser as they are essential for the working of basic functionalities of the website. We also use third-party cookies that help us analyze and understand how you use this website. These cookies will be stored in your browser only with your consent. You also have the option to opt-out of these cookies. But opting out of some of these cookies may affect your browsing experience.
Necessary Always Enabled
Necessary cookies are absolutely essential for the website to function properly. This category only includes cookies that ensures basic functionalities and security features of the website. These cookies do not store any personal information.
Non-necessary
Any cookies that may not be particularly necessary for the website to function and is used specifically to collect user personal data via analytics, ads, other embedded contents are termed as non-necessary cookies. It is mandatory to procure user consent prior to running these cookies on your website.
SAVE & ACCEPT

Create a website and earn with Altervista - Disclaimer - Report Abuse